Does Lyme disease occur in every State in the continental United States?

This photo has been reproduced from the more detailed version of the Tick Map found on the Home Page of the ALDF website. It summarizes current information, from 2006 – 2008) on the incidence of infected Ixodes ticks, as well as reported cases of Lyme disease in the continental United States. 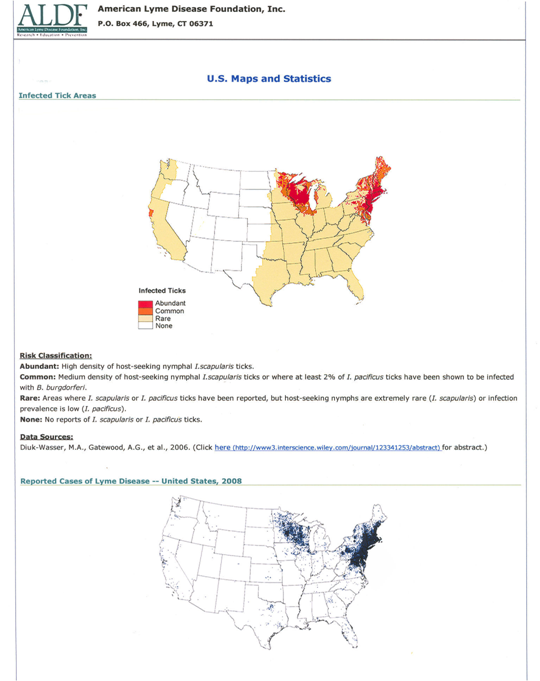 Note that no Ixodes scapularis or I. pacificus ticks are found in some States, and that there are several States in which I. scapularis or I. pacificus have been reported, but host-seeking nymphs — the major transmitters of Lyme disease — are extremely low as well as the prevalence of infection. Since Lyme disease is not a sexually transmitted disease and is transmitted to humans only by infected Ixodes ticks (see preceding articles in this section), it is not surprising that most (>95%) reported cases of Lyme disease occur in those States (the Northeastern and Upper Mid-Central States) where host-seeking nymphal I. scapularis ticks are abundant.

Ixodes ticks are not found in the Arizona, Colorado, Idaho, Montana, Nevada, North Dakota, Utah, and Wyoming. Consequently, it is reasonable for residents of those States with non-specific symptoms often associated with Lyme disease in the absence of positive serological tests conducted by validated standard procedures and possible exposure to Ixodes ticks from visits to endemic areasto consider other possibilities to explain their symptoms.

Although Amblyoma americanum ticks sometimes carry a strain of Borrelia called Borrelia lonestarii, there is no evidence to indicate that B. lonestarii produces disease in humans (1). Furthermore, A. americanum has not been shown to be a competent vector for B. burgdorferi, the spirochete that causes Lyme disease (2,3).